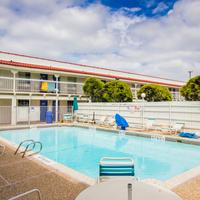 “Spacious room and parking lot was very lit up It’s walking distance to 711.”
“The room is spacious.”
“The super friendly staff.”
“Not really near anything you want to see when visiting Austin but very safe.”
“The bed was very comfortable.”
“Restaurant was Good”
“Rooms are clean.”
“Everything was really good for the price!”
“Kind of a lively location”
“The pillows and bed were surprisingly comfy!”