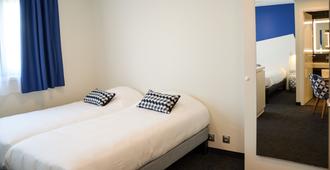 Đã cho điểm #3
Hotel Graffalgar
8,7
Tuyệt hảo 8,7
Dựa trên 353 đánh giá
Chi tiết
Đánh giá
2.380.403₫
Xem Deal
Comfort Hotel Strasbourg
Xem tất cả chi tiết
Sạch sẽ
8,8
Thư thái
8,2
Địa điểm
8,3
Dịch vụ
8,0
Nhân viên
9,2
Tổng quát 8,5 Tuyệt hảo
Dựa trên 5.045 đánh giá
Tất cả đánh giá
Sạch sẽ
8,8
Thư thái
8,2
Địa điểm
8,3
Dịch vụ
8,0
Nhân viên
9,2
Tuyệt hảo 9,1
Ưu: Comfortable and clean. Free parking was much appreciated! Also onsite restaurant with garden seating and $10 breakfast convenient and good. Johann and restaurant staff were very cheerful and helpful. I thought it was a great value. My daughter loved the gummy candy buffet at breakfast.
Khuyết điểm: Can't think of anything negative.
Tốt 7,0
Ưu: Nice welcome, provided a map of Strasbourg and some recommendations. Room small and basic but modern and clean, with flatscreen...good for the price and for exploring the city. Well located..initially it seems out of the way but is actually perfect as there is free parking and easy walk along the river or tram to the city centre. Decent restaurant too.
Khuyết điểm: Room (and bathroom) on the small side
Tốt 7,3
Ưu: very comfortable and clean rooms bed is very good)
Khuyết điểm: nothing
Tốt 7,3
Ưu: The manager was speaking English, German and French when we checked in, which was fun... and the breakfast buffet was great as well..
Tốt 7,0
Ưu: The staff was extremely helpful and the rooms (although small) cosy and very clean. Very good value for money!
Tốt 7,0
Ưu: every thing is wonderful, except the location
Khuyết điểm: the hotel is difficult to find
Tốt 6,8
Ưu: Easy to use tram to the city center. Very good value for money
Khuyết điểm: Does not have air conditioning.
Tốt 7,2
Ưu: Its ratio price-quality is just amazing.
Khuyết điểm: Maybe it's a little far away from the city centre.
Tốt 6,8
Ưu: $review.pros
Khuyết điểm: Location is close to highway which makes it noisy
Ổn 5,6
Ưu: cleanliness
Khuyết điểm: the smell of paint that was outside: they must be repairing smth
Tuyệt hảo 8,0
Ưu: confort, cleanliness, good position on Strasbourg map, very nice staff
Khuyết điểm: nope 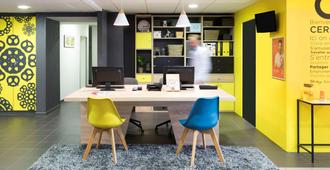 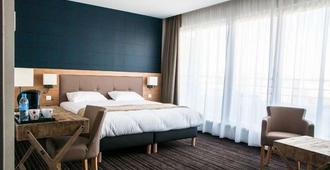 Đã cho điểm #8
Appart'City Strasbourg Centre
7,9
Tốt 7,9
Dựa trên 1.820 đánh giá
Chi tiết
Đánh giá
1.432.864₫
Xem Deal
CERISE Strasbourg
Xem tất cả chi tiết
Sạch sẽ
8,0
Thư thái
7,7
Địa điểm
7,6
Dịch vụ
7,6
Nhân viên
8,5
Tổng quát 7,8 Tốt
Dựa trên 1.078 đánh giá
Tất cả đánh giá
Sạch sẽ
8,0
Thư thái
7,7
Địa điểm
7,6
Dịch vụ
7,6
Nhân viên
8,5
Ổn 5,7
Ưu: The hotel is basic but clean. Situated a bit out of the city centre but the tram stop is near by.
Khuyết điểm: People working in the reception area are sometimes confused. Getting the e-mail confirmation of the reservation over the phone took 5 days and few phone calls.
Ổn 5,0
Ưu: The room was of average to small sized for cheaper hotels in France and the position was near the station, Restaurants and a number of Bakeries.
Khuyết điểm: Old furnishings and the room floor had a pronounced downhill slope. A one person lift meant that if there was more than one person in the room it could take some time to take up or down your bags. A small bathroom and shower meant that my husband kept banging his elbows on the shower screen.
Tốt 6,3
Ưu: new furniture, easy car parking, close to the tram.
Tốt 6,7
Ưu: The staff was very welcoming and reactive to my demands.
Khuyết điểm: There was a bad smell (egouts) in the hall of the 5th floor, luckily not in the room.
Tốt 6,0
Ưu: The hotel is rather conveniently located - once you learn how to use local transportation, it is very simple to get to the city centre. I would not recommend it for those who come to work at any of the European institutions and counting on local tranportation. Not so convenient.
Khuyết điểm: I could not get the internet to work. The staff did give me a set of instructions how to hook up on the wire, and then a password for the wireless connection, but neither worker. Having said that, another guest did manage to get on line. So, it could have been only my laptop and my IT skills (or lack thereof)
Tốt 6,4
Ưu: A very clean room, very convenient, with good working kitchen facilities
Khuyết điểm: Staff does not speak English, especially, especially it brings inconveniences at the reception.
Tốt 6,4
Ưu: Cheap rate, good value for money, clean hotel
Khuyết điểm: Parking is a nightmare, they may have secured parking at the back but they dont have a rear door leading to it. One has to go around the front to get into the hotel. Its a big security risk when guests can be seen by passersby taking stuff off from the car to be brought to their rooms.this issue should be addressed asap, I would love to go back to this hotel someday. Another downside is the tv doesn't have English channels, even a news channel would have been enough. I suppose not all guests are french or german speakers
Tốt 6,0
Ưu: rooms were quite comfortable
Khuyết điểm: it was not stated that we would have to bring our own LAN cable to use the wired internet
Bình thường 2,0
Ưu: nothing.
Khuyết điểm: the location is horrible it was a lie on the internet advertising its location half between centre ville and european institution while in fact is the banlieu of strasbourg. no tv, no radio, no phone no one came to clean the room
Tốt 7,2
Ưu: We had a 2-room apartment which was spacious. There was a bathroom and a fully equipped kitchenette. As we travelled with our young son, we appreciated the possibility to cook our own meals. Also, there was a lot of space in the apartment for the child to play.
Khuyết điểm: The location (far from the centre and farther from the European Parliament). 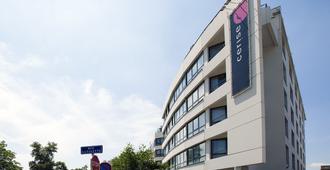 Đã cho điểm #12
Montempo Apparthotel Strasbourg Gare
7,2
Tốt 7,2
Dựa trên 1.414 đánh giá
Chi tiết
Đánh giá
1.340.421₫
Xem Deal
Premiere Classe Strasbourg Ouest
Xem tất cả chi tiết
Sạch sẽ
6,9
Thư thái
6,1
Địa điểm
7,3
Dịch vụ
6,2
Nhân viên
8,0
Tổng quát 6,8 Tốt
Dựa trên 2.058 đánh giá
Tất cả đánh giá
Sạch sẽ
6,9
Thư thái
6,1
Địa điểm
7,3
Dịch vụ
6,2
Nhân viên
8,0
Tốt 6,3
Ưu: quite good, the price was the best
Khuyết điểm: no towel the first day, but later I had
Tốt 7,3
Ưu: prices
Tốt 6,0
Ưu: The hotel room was clean. The reception process was automated, which tremendously increased convenience.
Khuyết điểm: Peripheral location from the city center. Public transit was good though.
Tốt 6,0
Ưu: Good location, next to the motorway and supermarket. Car Park.
Khuyết điểm: Too small bedroom and shower-room.
Bình thường 3,7
Khuyết điểm: ventilation was extremely poor. The room was exceptionaly noisy due to other guests. The room was bare. small and depressing.
Tốt 6,0
Ưu: Self-service, guests do not rely on any staff, but can do everything on their own, TV with alarm clock
Khuyết điểm: It was very difficult to find road A351, as you also have road A350 which also has exit 4 - better instructions for drivers should be available, the room was overheated and it was not possible to turn the heating down or off
Tốt 6,8
Ưu: Close to commercial centre and tramline-( a short walk away). Possible to leave the car at the hotel and use the tram to go in and out of the centre of town.
Khuyết điểm: $review.cons
Tốt 6,0
Ưu: Access to city center
Khuyết điểm: Size and usability of shower
Bình thường 2,4
Ưu: $review.pros
Khuyết điểm: too noisy
Tốt 6,8
Ưu: Easy access into Strasbourg by the tram.
Khuyết điểm: $review.cons

Đã cho điểm #13
Premiere Classe Strasbourg Ouest
6,8
Tốt 6,8
Dựa trên 2.058 đánh giá
Chi tiết
Đánh giá
1.201.757₫
Xem Deal
Hotel Weber
Xem tất cả chi tiết
Sạch sẽ
6,5
Thư thái
6,0
Địa điểm
7,9
Dịch vụ
5,6
Nhân viên
7,8
Tổng quát 6,6 Tốt
Dựa trên 1.572 đánh giá
Tất cả đánh giá
Sạch sẽ
6,5
Thư thái
6,0
Địa điểm
7,9
Dịch vụ
5,6
Nhân viên
7,8
Ổn 5,7
Ưu: Inexpensive, clean, friendly staff. Walking distanced from suburban railway station, important for one who travels by trains. Close to inexpensive eateries. And close to the museum of history of Berlin, that I really enjoyed.
Khuyết điểm: Just to caution late arrivals to let the staff know in advance, as otherwise there might nobody be there to let them in.
Tốt 6,0
Ưu: Cleanliness. Staff hours being tabled clearly on the Internet.
Khuyết điểm: Yes, it was cold there in. There was no duvet, only a sheet and a thin bed cover. I asked the receptionist for a blanket (was not in the room). I received it, but despite that it was still cold while sleeping.
Ổn 4,0
Ưu: The person at reception was very kind
Khuyết điểm: Cleanliness of bed cover, heating not working, wc smell
Bình thường 3,4
Ưu: Location is good, price is reasonable.
Khuyết điểm: The room is not clean.
Tốt 6,0
Ưu: Simple but clean room, quality facilities. Free wifi very much appreciated. Excellent value for money for not too demanding travellers.
Ổn 5,6
Ưu: the hotel fit my budget, nice staff and good location - close to the train station and the city center
Khuyết điểm: the cleanliness of the sheets
Ổn 5,2
Ưu: Clean, basic accomodation.
Khuyết điểm: No bedside lights.
Tốt 6,8
Ưu: Rooms very clean, bathroom new and very clean. Vry good for the price payed and very near train station.
Khuyết điểm: $review.cons

Đã cho điểm #14
Hotel Weber
6,6
Tốt 6,6
Dựa trên 1.572 đánh giá
Chi tiết
Đánh giá
1.086.203₫
Xem Deal
Kyriad Direct Strasbourg Ouest - Zénith
Xem tất cả chi tiết
Sạch sẽ
6,3
Thư thái
6,1
Địa điểm
7,0
Dịch vụ
5,8
Nhân viên
8,1
Tổng quát 6,4 Tốt
Dựa trên 720 đánh giá
Tất cả đánh giá
Sạch sẽ
6,3
Thư thái
6,1
Địa điểm
7,0
Dịch vụ
5,8
Nhân viên
8,1
Bình thường 3,7
Ưu: i really liked that in the room, there was a machine to boil water, some cups, tea, coffee and biscuts and for free. it was good because in the morning i didnt have time to have a breakfast so it was nice to be able to have a coffee in the morning and a tea in the evening in my room
Khuyết điểm: it is really away from the citycenter but next to a commercial village..it is a nice hotel for people who are travelling and they pass by strasbourg because the hotel is near the highway. but in order to go to the citycenter, i needed to walk for 15 minutes and then take the tramway for 20 minutes...in the morning it was ok, but in the evening i was scared to do this by myself as the area around the hotel is quite isolated. so i proposed to people who have a car
Ổn 5,3
Ưu: Very welcoming hospitality although rooms are quite basic.
Bình thường 2,7
Ưu: nothing
Khuyết điểm: The room was dirty and bad odour. The room is too small for a family and the price was excessively high if it compare with the quality with other ones
Tốt 7,2
Ưu: It was on the ground floor so that it was easy to unload our car.There were good sized towels and the shower was very good. Also there weere spare pillows.
Khuyết điểm: Until we turned on the airconditioning the room smelled of cigarette smoke even though we had asked for a non-smoking room.