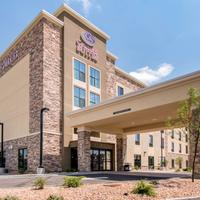 “Beds and pillows were comfy. Location was accessible with places to eat near and groceries etc.”
“A good size room. Nice sitting area. Very comfortable and clean.”
“Complaint! There was a dog barking all night. Called management, they tried but did not kick them out & dog continued to bark...no sleep! 2nd night people arguing most of the night..no sleep again!”
“There’s was no breakfast. They should’ve updated their website because that’s the only reason why I picked the hotel”