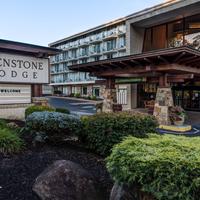 “Location was good, just a short walk down the road and you were in downtown Gatlinburg and close to any activity you wanted to do. Staff was nice. Hotel is a little dated but overall is a nice place to stay.”
“The rooms were sizeable, the water was hot, the location is great whether you're checking out Gatlinburg's tourist district or catching the trolley to Dollywood. Although we didn't go for a swim, the indoor pool looks amazing and I'm sure it's fun regardless of the season. I did note plenty of young families enjoying it while we were there and the air doesn't overwhelm with chlorine. ”
“Great location to downtown Gatlinburg, the staff were friendly and helpful”