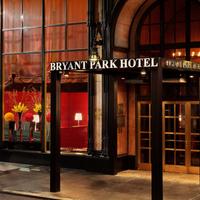 “Room was modern, spacious and clean”
“The room was nice with a great view and an amazing bathroom. Staff was friendly and helpful.”
“It has a great feature during weekdays where their stylish bar has an open bar hour for hotel guests. Directly across Bryant Park and close to many boutique coffee shops and Fifth Avenue are all pluses.”