Đã cho điểm #2
Pensiunea Maria
9,2
Tuyệt hảo 9,2
Dựa trên 338 đánh giá
Chi tiết
Đánh giá
775.558₫
Xem Deal
B13 Hostel
Xem tất cả chi tiết
Sạch sẽ
9,1
Thư thái
8,8
Địa điểm
9,8
Dịch vụ
8,8
Nhân viên
8,9
Tổng quát 9,0 Tuyệt hảo
Dựa trên 907 đánh giá
Tất cả đánh giá
Sạch sẽ
9,1
Thư thái
8,8
Địa điểm
9,8
Dịch vụ
8,8
Nhân viên
8,9
Tuyệt hảo 10,0
Ưu: Location. Cleanliness.
Khuyết điểm: Sadly a guest kept the air con up high and I couldnt breath so slept in TV room. Very rude black man, no wonder virus spreads.
Kém 1,0
Ưu: location
Khuyết điểm: EVERYTHING. If u want to travel safe, pay a little more for a hotel or just spend a night here without shower. I do not have a prove pictures or so to you, but I'm already the evidence. I booked 4nights stay in sibiu in this hostel because of it's ranking, the hostel is huge, but lifeless, the reception is hardly on the desk, the CCTV are for decorations, and there are crazy people creeping u in ur shower! seriously! this place is not safe for a lady to stay. this crazy guy who spy me shower, came in the lady's bathroom TWICE! and what the reception do? putting me in another separated room, alone, which made no help but me getting more afraid what more crazy thing would happen. i did not slept, i was scared, i went to the police department for help(as I'm a muslim girl, this incidence is very hard for me), when i came back to the hostel with the cops(which they did nothing, but just talking to the reception), the reception was angry, he gave me back the money and demand me to pack my bags and leave in 10minutes. the reception on duty was a fat boy, with rude attitude, and like a robot, lifeless. PS, also to the owner of this hostel, please do not try to deny this incidence, i have a police report filed, and i will post it on the Internet.
Tuyệt hảo 9,0
Ưu: Perfect location, perfect price, perfect common area!! Comfortable matrass
Khuyết điểm: Kitchen is too small for such huuuge hostel, but still it's very good equipped
Tuyệt hảo 10,0
Ưu: Clean, comfortable accommodation with a nice central location close to restaurants, bars, supermarket, etc.
Khuyết điểm: A lot of late night noise from a nearby bar/club but possibly unavoidable in this location. Prefer to have the length of bunk beds against a wall for extra stability and privacy rather than both long sides of the bed being open.
Tuyệt hảo 9,0
Ưu: Super clean. Well maintained. Great facilities and big lockers. Great showers.
Khuyết điểm: Beds could be more sterdy.
Tốt 6,7
Khuyết điểm: The kitchen must be clean well! I saw every evening a few cockroches walking near the dishes!!!!
Tuyệt hảo 10,0
Ưu: Great location, comfy bed, clean bathroom, nice vibe.
Tuyệt hảo 8,6
Ưu: Everything brand new and spotlessly clean. Awesome location right off main square. Friendly staff and a nice common area. Nice, though small, kitchen.
Khuyết điểm: Mattresses weren't very comfortable. Showers were "military style" with multiple shower heads in an open area.

Đã cho điểm #4
Hilton Sibiu
8,9
Tuyệt hảo 8,9
Dựa trên 2.172 đánh giá
Chi tiết
Đánh giá
3.713.279₫
Xem Deal
Best Western Silva Hotel
Xem tất cả chi tiết
Internet
10,0
Nhà hàng
9,4
Bữa sáng
9,2
Dịch vụ
9,1
Địa điểm
8,4
Tổng quát 8,9 Tuyệt hảo
Dựa trên 935 đánh giá
Tất cả đánh giá
Internet
10,0
Nhà hàng
9,4
Bữa sáng
9,2
Dịch vụ
9,1
Địa điểm
8,4
Nhà hàng
9,5
Bữa sáng
9,3
Dịch vụ
9,2
Địa điểm
8,3
Phòng
7,2
Bữa sáng
9,2
Dịch vụ
9,0
Địa điểm
8,3
Phòng
7,9
Dịch vụ
8,9
Địa điểm
8,4
Phòng
7,8
Địa điểm
8,6
Tuyệt hảo 10,0
Ưu: We are resting only for one night but it was very comfortable for family. Very beautiful view on the park, excellent for walking, visit Christmas Market and to have rest. The host was very kind.
Khuyết điểm: Nothing
Tuyệt hảo 8,0
Ưu: Everything was perfect. The room was big, nice bathroom, breakfast was diversified, and the staff was very nice with us. I think it was a bit expensive
Khuyết điểm: I enjoyed everything
Tuyệt hảo 8,0
Ưu: The room was really cozy and nicely decorated. We had tea and coffee in the room every day. Towels and toilet paper were replaced and filled every day. We also had slippers and a robe in the room for use. The minibar had decent prices. The breakfast included was really good.
Khuyết điểm: The door to the balcony had some issues on it's right side which allowed some air flow which would make hard for the room to keep too warm. There were also some coffee stains on the wall and the shower head was half worned out. Also, the bathroom ventilation isn't that good and it smells like still water after every shower.
Tốt 7,5
Ưu: Staff, breakfast and location was nice. Rooms looks recently renovated, clean... but hotel itself is old. For this price you can find better hotels in Sibiu.
Khuyết điểm: The bed is awful, is super hard (maybe for my taste, but ive been is so many hotels all over the world and I know how to make the difference)... the carpet in the room is softer, so better sleep on the floor... 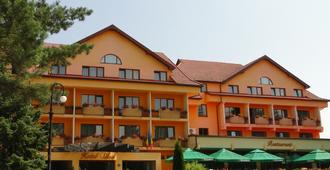 Đã cho điểm #6
Golden Tulip Ana Tower Sibiu
8,7
Tuyệt hảo 8,7
Dựa trên 1.279 đánh giá
Chi tiết
Đánh giá
2.138.660₫
Xem Deal
Pensiunea Daniel
Xem tất cả chi tiết
Sạch sẽ
8,9
Thư thái
8,3
Địa điểm
9,5
Dịch vụ
8,2
Nhân viên
8,6
Tổng quát 8,7 Tuyệt hảo
Dựa trên 247 đánh giá
Tất cả đánh giá
Sạch sẽ
8,9
Thư thái
8,3
Địa điểm
9,5
Dịch vụ
8,2
Nhân viên
8,6
Tuyệt hảo 8,0
Ưu: The place is very central - around 300m to the old town main square, with everything close by. But - its also a gated, secured, and quiet so you aren't bothered by the noise outside. The place is also close to several thrift shops and second hand stores, giving a pretty cool experience and a good value for vintage clothes and other stuff.
Khuyết điểm: The curtains didnt really close the entire window, allowing small amounts of light from a lamppost nearby to pass through. The shower soap dispenser didn't work, or was empty.
Tuyệt hảo 9,6
Ưu: Very pleasant hosts; interesting buildings; lovely big traditionally furnished room; excellent breakfast buffet. On our morning of departure, we were grateful to be allowed to leave our vehicle in the courtyard while going to explore the town.
Khuyết điểm: The bathroom was very nice but the hot water took a long time to come through. The beds were not very comfortable.
Tuyệt hảo 10,0
Ưu: The room was very good the staff was helpful. The pension is in a very good site in the old town.
Khuyết điểm: Nothiing
Tuyệt hảo 10,0
Ưu: Everything
Tốt 7,0
Ưu: Location, private parking and clean.
Khuyết điểm: The beds. Not that comfy as you might expect, they definitely need to change the old mattress + the sheets.

Đã cho điểm #9
Ramada by Wyndham Sibiu
8,5
Tuyệt hảo 8,5
Dựa trên 2.662 đánh giá
Chi tiết
Đánh giá
2.279.671₫
Xem Deal
Casa Frieda
Xem tất cả chi tiết
Đồ uống
10,0
Địa điểm
9,1
Bữa sáng
8,9
Dịch vụ
7,4
Phòng
6,5
Tổng quát 8,5 Tuyệt hảo
Dựa trên 2.029 đánh giá
Tất cả đánh giá
Đồ uống
10,0
Địa điểm
9,1
Bữa sáng
8,9
Dịch vụ
7,4
Phòng
6,5
Bữa sáng
9,0
Địa điểm
9,0
Dịch vụ
6,9
Phòng
5,8
Địa điểm
9,3
Bữa sáng
9,0
Dịch vụ
7,8
Phòng
5,6
Sạch sẽ
4,8
Địa điểm
8,9
Tuyệt hảo 9,0
Ưu: Excellent value for money guvern the room room price included breakfast for 2 persons
Tuyệt hảo 10,0
Ưu: Fantastic location, quiet comfortable and spacious room. Nice breakfast options too.
Tuyệt hảo 10,0
Ưu: Nice view, close to everything you can possible visit in Sibiu. The restaurant has traditional food which is very good and the service is very good. Ah forgot to mention be careful with the hot water, it's really hot :)
Khuyết điểm: A bit the noise from outside, but it's understandably if you have the room with the view, for me wasn't a problem, but it's good to be aware of that.
Ổn 4,0
Ưu: Perfect location to eat out every night and if you need a taxi every day
Khuyết điểm: The room in the pictures does not represent all of the rooms (my guess is, its the only one with a new bathroom). Shower was dirty. Breakfast is from 8-11. No use if you are here for work and/or leave early. Also its from the menu (no buffet).
Tuyệt hảo 9,0
Ưu: The location. The breakfast. The size of the room. The restaurant's decoration. The personnel were very friendly and helpful.
Khuyết điểm: The personnel didn't speak good English and as a result there were problems of understanding. Be a little more careful about the cleanliness of bedclothes.
Tuyệt hảo 10,0
Ưu: The room was clean, the breakfast exeptional.