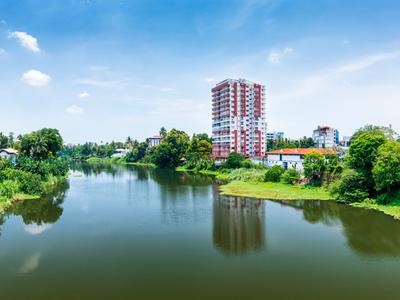 Ưu: "Crew was better and helpful"

Khuyết điểm: "The boarding process at Addis Ababa airport was late, slow and very disorganized. Once on the plane, it was very chaotic as passengers did not wait for people to put bags in the overhead bin without passing by, and not all overhead bins were open for loading. Please control this process better."

Ưu: "Lots of entertainment options. Good leg room. Good food. Made a 16 hour flight about as tolerable as one can hope for."

Ưu: "Since not enough room in "What could have been better". For as long as my second flight was, from Dubai to Boston, the seats in coach were criminal!!! Way to narrow, especially if sitting next to a large person. Not nearly enough distance to seat in front of you, can't even bend over to reach some-"
Khuyết điểm: "thing on the floor. The seats do NOT recline enough to be able to relax & get shuteye. It would have been really nice to have a footrest of some type, even busses have those! I am a small person, 5'1'' and 110 lb. Consider not having such a huge gap between 1st class and economy. Way over crowded."

Khuyết điểm: "2 hour delay sitting in Bangkok airport due to sick passengers and their luggage getting off"

Ưu: "Loved the service and the movie options."
Khuyết điểm: "The food was just okay. It was pretty bland."

Ưu: "Easy check in and comfortable flight. The crew are very helpful."
Khuyết điểm: "Couldn't get my preferred isle seat or sit with my wife who was in a different row."

Ưu: "Valuable reminders ! Updates regarding flights was superb."
Khuyết điểm: "Nothing to say."

Khuyết điểm: "Didn’t get to pick out seats and got stuck in a middle seat. No opportunity to change, even though I tried to do so a week before the flight as welll as once online check in opened."

Khuyết điểm: "Caused me a 20+ hour layover in dubai in a horrible hotel"

Ưu: "Nothing about thto flight was enjoyable."
Khuyết điểm: "For 14 hours there were screaming babies making for a miserable flight. Cabin crew was extremely slow on all fronts"

Ưu: "Footrest would make the flight just perfect."
Khuyết điểm: "No footrest. Makes it a little uncomfortable for short people."

Ưu: "Entertainment - excellent"
Khuyết điểm: "Seat (bed) - not very comfy (could be wider and full bed) Food - very poor breakfast (dinner was very OK). It's a shame for such an airline to serve such a breakfast (continental)."

Ưu: "Very polite & helpful crew & agents.... both at Dhaka Airport & the flight. Conditions to work in Dhaka Airport are difficult & yet your ground personnel were calm & helpful with a smile on their faces!"
Khuyết điểm: "Very little isle space!!! Now I know how sardines are packed!! Did you put in more seats? Seems like you have!! With no consideration for the simple, basic comfort of your passengers!! Just because most of the passengers were Bangladeshis you DID NOT have to serve only what was a very poor excuse of Bengali food!! A choice or better quality food would have been appreciated!!"

Khuyết điểm: "My one problem, which is not Emirates' problem, is the lady that sat behind me on my way to Dubai in October was unhappy if I reclined my seat at all. I didn't want to cause a problem, so I left it upright - later on, when I walked to the back, I saw her sleeping w/her seat reclined! That really was my only complaint, and like I say, that really has nothing to do w/Emirates."

Ưu: "The Crew on Emirates are just the best in the industry"
Khuyết điểm: "paid extra for legroom but the legroom seats have a big disadvantage of no place to put things you need on a long flight."

Ưu: "Emirates is a true Customer Service oriented airline. It is a relief to know that in this age of carriers that charge you a lot and treat you like you are paying a bus ticket there are airlines that still know the key to success. Boarding was fine and not dependent on local personalities. You can tell the company cares about training. The food and entertainment is excellent. Seats are still a little smaller but they try and make up with it with other perks. Flight crew was polite, smiling, and accommodating no matter the time. Pillows, blankets, snacks, etc. all given without having to ask or be charged. We were also given these little self care packs with toothbrush & paste, eye pillow, socks, and earplugs! Overall it made a long flight over night very comfortable."
Khuyết điểm: "Nothing!"

Ưu: "The service the movies the food"

Ưu: "Everything."
Khuyết điểm: "Nothing."

Ưu: "One of the better experiences I've had on a plane"

Ưu: "Everything"
Khuyết điểm: "No"

Ưu: "Love the idea of informing every leg of my flight. Thanks"

Ưu: "on the plane the service was okay"
Khuyết điểm: "The flight was overbooked, barely got in. At the gate they checked carry on baggage weight and charged extra. They could have done it during check in.... pathethic"

Ưu: "The entertainment options were great!"
Khuyết điểm: "There was no leg room at all in economy. My knees were in the seat of the person in front of me. Most of the food was terrible and I only ate the bread. The TV is on the back of the seat in front of you and is a touch screen. You have to touch pretty hard. So, every time the person behind me was scrolling, they had to hit my seat."

Ưu: "Crew were lovely very friendly and helpful"
Khuyết điểm: "Ground staff was quite rude refused to let us access the lift so we could board from the upper deck even though we were business class. She insisted that I walk round and board from where she was because she didn't want to walk a few steps and swipe her card for us to access the lift."

Ưu: "Finally, a great airline with a direct flight from New York to Athens and very reasonable fares. I hope they keep it that way. Also, Newark is a much better airport to fly to and from than JFK."
Khuyết điểm: "Crew was ok but could have been a little better, and the drinks selection could be improved."

Ưu: "The A380 equipment is beautiful and spacious even in coach. The changing ambient lighting added to a great positive experience. Food and service was excellent. The entertainment system and seat amenities are top notch - large screen, great selections, power sources, remote control (cabled). I was so impressed I planned to join their frequent flyer program (*** but see review of second leg - Dubai to Manila *** )."
Khuyết điểm: "Was served the wrong meal even though I double-checked with the FA."

Ưu: "Same comments as above."

Ưu: "Flight was comfortable"
Khuyết điểm: "Not enough Veg food even though requested well in advance."

Ưu: "A selection of recent find on the in flight entertainment, relatively comfortable seats, and generally good care whilst in board."
Khuyết điểm: "I don't understand why cheese and crackers or orange juice are removed from the lacto-ovo vegetarian meals. Sometimes it seemed i was getting half a meal compared to my mom-vegetarian girlfriend's meals."

Ưu: "The courteous and friendly on-board service, spacious seating and clean men's rooms were the best part of the journey. The smiling stewardess were outstanding in creating a happy environment. I will consider Emirates for my future travels."
Khuyết điểm: "Coffee was ok but could be better."

Ưu: "Flight wasn't filled. Takes off and lands at not-business ideal times so it was perfect flight for vacation. Crew remained quiet and left lights off full flight instead of turning them on and off"

Khuyết điểm: "D seats are exrremely uncomfortable. Leg space is as good as none. My knees were hurting as they were touching the seat infront of me. D crew gave very slow service. I was sick and needed hot water, even after calling for ur for more than 4 times , the crew constantly forgot about it. Food was alright. I dont see myself ever flighting back with Emirates jus for because of the seat discomfort and lack of leg space"

Ưu: "Flight attendants were patient and kind despite tension between passengers due to lack of overhead space."
Khuyết điểm: "Very rough flight and every set of earphones were defective."

Khuyết điểm: "Had a tough time to get a replacement ticket."

Ưu: "See above. Great airline all around. We travel a lot and overall it is one of the two best in the world on almost all counts."
Khuyết điểm: "For large number of passengers, boarding is impossibly slow. I don't understand why, after boarding the priority passengers, airline don't board the rest of us from the back of the plane to the front. Doing it the other way makes us stumble across the front seated passengers who are busy stowing their carry-ones. This causes a bottleneck in boarding. Also, there are too many checks on us, which also slows things down. Also, Emirates advertises: one carry-on item of less than 15 pounds. On this flight I would say that at least 75% of the passengers violated this with large and multiple carry-ons. This is unfair to those of us who try to go by the rules."